Colour Me RAD - The Volunteer Edition 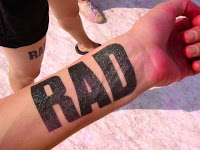 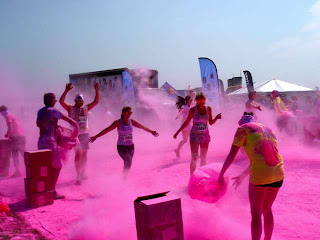 I do a lot of volunteering, to the point where I finally had to start saying no just so I would actually have some free time left over. I learned to be much more selective about the people and causes I donate my time to, and expect certain things in return (e.g. not having my time wasted standing around doing nothing, for one). I also tend to focus on events-based volunteering to test drive an organization before donating to them or committing any more of my time - it's a great way to not only have some fun and check out swanky events for free, but also gives you a great inside look at the organization in how on the ball the staff are and how well they treat their volunteers and guests.

Colour Me RAD was a bit of a mixed bag for me. A portion of the proceeds from the Toronto event went to Big Brothers Big Sisters (BBBS) and I signed up after a friend passed on the volunteer information. Or, rather, I tried to. The first time I filled out the volunteer form (through the event website), nothing happened. I never heard back from the event organizers. However, about a week before the event, I got the BBBS newsletter with a call for volunteers and thought I might as well give it another try. That produced two volunteer shifts (I thought it was an either/or when I signed up, but oh well!). As I found out later, both the organizer and the charity had their own volunteer teams, though how exactly that worked is still a mystery to me. All I know is that my experience wasn't the same on the two teams.

My first volunteer shift was on one of the two race kit pick-up days and I thought I was supposed to be on registration. When I got there at the start of my shift, I was handed a volunteer t-shirt and got walked over to the merch table instead (even though a couple of girls who came an hour later got spots on registration). There wasn't much of an orientation provided (it basically consisted of one of the other volunteers telling me in 2 secs what we were doing) and none of the staff introduced themselves. Two of the other merch volunteers were there the day before and they seemed to know the staff but the rest of us barely got a sidelong glance. And there wasn't very much for the new people to do until we went off and found our own work. The staff person at the merch table also didn't bother telling us when lunch arrived and we could go eat - we found that out from the other volunteers as well. Not impressed. 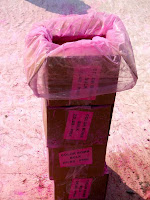 After that experience, I wasn't looking forward to wasting another day, but I made a commitment and it wasn't awful enough for me to back out last minute. My second shift was on the second race day and this time around the BBBS volunteer coordinator kept me with her all day and the experience was vastly different. Not only was I introduced to everyone at my station, but she kept an eye out for me all day to make sure I was enjoying myself. Night and day as far as my experience with the event was concerned. Most of our BBBS tent team ended up on the colour bombing squad pelting runners with coloured powder when it turned out that not enough Colour Me RAD volunteers had shown up. While this was a lot of fun, it was also exhausting and a greater commitment than you think when you factor in the clean-up requirements (yourself included!...plus the associated car, laundry, and home cleaning).

The race was staggered but for us it meant the runners were spread out and coming through non-stop for two hours straight. Think pitching baseballs continuously for two hours and you'll get the idea (I have the limited range of motion today to prove it!). The main event organizers were on site working hard and did come around to give us a proper briefing on how to do it right, as well as jumped in to help out halfway through and were super helpful. Those guys earn their keep! The main downside was that we were covered in pink dust and often the cloud was so thick we couldn't even see the runners. Despite the masks and glasses, that stuff was in out eyes, ears, noses, and eyes (in addition to covering us completely!) and at times it was hard to breathe. On the other hand, the full-on powder coating kept us from getting sunburned. When it was finally over and we sat down to some well-earned pizza, I was dead on my feet, which I didn't realize until then. And the shift ended up being longer than I signed up for. Scheduled to be there until noon, I finally bailed at 1:30pm because I had somewhere else to be and was quickly running out of time.

The tricky part came when I thought about getting back in my car to drive home. BBBS ran out of volunteer t-shirts early on (the extras were handed out to drenched volunteers the day before because the BBBS volunteer coordinator cares about her crew). We got a pile of event shirts from the merch table but these were also gone and when I walked over to the merch table to ask if there was one I could put on so I had something clean to drive home in, the same girl from my first volunteer shift told me I could buy one if I wanted to. Having given up two days of my personal time to help with an event they made bank on, I wasn't particularly thrilled by the idea of having to shell out $20 just so I wouldn't have to spend an hour cleaning my car after they put me on a job I wasn't even supposed to be on. Definitely a sour note to end the day on and one that would probably make me think twice about volunteering for their event again.

As for personal clean-up, I'm still not quite finished two days later. Whatever that powder was (a mix of corn starch and food-grade colour), it was much harder to get out than the liquid Crayola paint I got covered with at the Corona Paint Party. After a good 30-min scrub in the shower (no joke!) I still have spots of pink colour on me and they're all in places that were actually covered by clothes. This is the first time I remember feeling exhausted after a shower. The colour also didn't entirely come out in the wash, so if you do the race, don't wear anything you're particularly attached to.

WHAT: Colour Me RAD Toronto 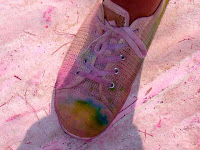 INSIDER TIPS: Those who volunteers on one of the pick-up days had the option of running in the race for free. If you do run, be sure you bring something to protect your face when you run because you will be running through clouds of coloured corn starch. As far as volunteering in general is concerned, try testing out a few organizations by volunteering for one of their events before making a greater commitment. It's a great way to test them out and see if their corporate culture is a good fit for you. If it's not, the time commitment is limited and it's very easy to walk away after the event is done without having to "break up" with them. 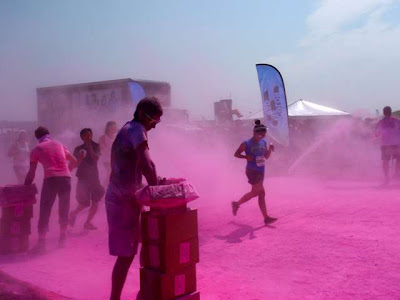 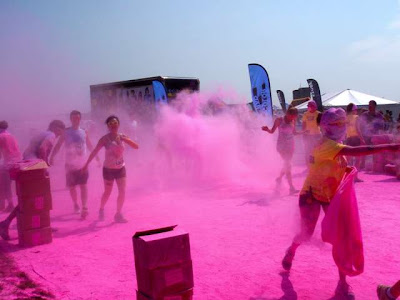 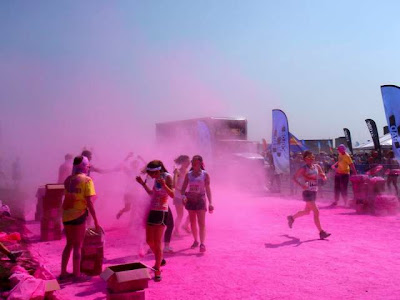 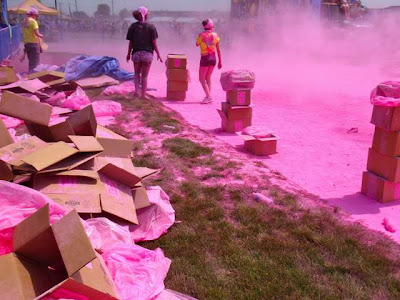 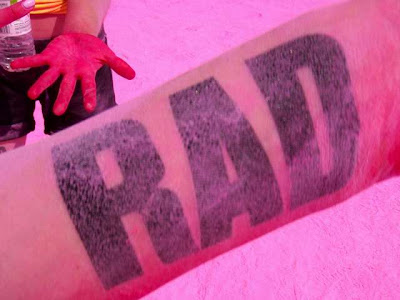 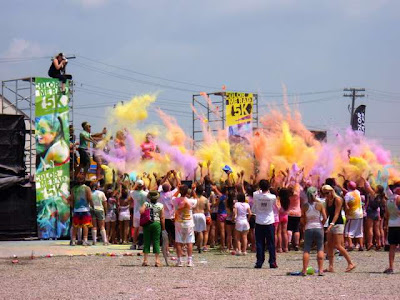