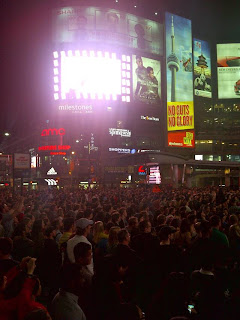 NXNE takes over the city for a week each June and is jam packed with sights and sounds for every taste. This is the one festival where you get a chance to check out both the yet undiscovered home-grown talent (and be among he first to see some of the future stars before they make it big!) and some of the biggest international superstars. Venues are spread out all over the city and the extensive local media coverage makes it easy to find a show you'll like even for those who consider themselves music scene neophytes. NOW Magazine and BlogTO are two of the outlets that always publish guides to the festival, along with their recommendations, and SOCAN provided a nifty pocket-sized (well, kinda) guide this year that made it easy to see what was happening when and where. For the die-hard music lovers, there is always the option of taking a few days off work (and many do!) and taking advantage of the very reasonably priced festival wristbands that get you into all the shows (and/or movie screenings). The only challenge is trying to be at a multitude of locations at the same time! Because the line-up is pretty stellar and it is always tempting to try and see it all. 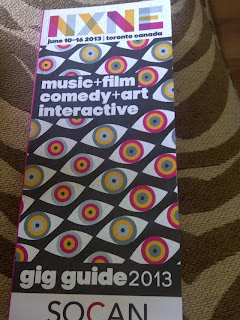 For those not sure about their commitment to live music, there are quite a few free shows that are either part of the official festival or one of several spin-off events throughout the city. For example, free shows at Yonge-Dundas Square this year included such headliners as The National, Ludacris, and Billy Talent. You can rest assured the crowds were out in full force for these. I didn't have time this year to check out much of the festival but I did carve out some time in my calendar to check out The National (and catch the tail end of Hayden) at the square.

Once again, I was quite impressed with the quality of sound at such a busy intersection in the heart of the city. I stayed on the edge of the crowd this time, across the main stage (and TV screens) by the mall entrance. This actually worked out really well (and offered a better view than from among the throng of the massive crowd, as well as an improvised seat!) until everyone around me started smoking. Oh well. You win some, you lose some. Still, the show was great and not as claustrophobia-inducing from the outskirts, so this is definitely one option for those concerned about the crush of people. The city didn't close down the street for the show but the crowd eventually took care of that itself, so the police had no choice but to patrol the edges and redirect cars because there was no stopping people from spilling into the street (though it was fascinating trying to watch a big rig trying to navigate the shrinking road space right before this happened). The National didn't play my favourite song but Hayden did, so that was a nice treat before heading home.

WHERE: Venues throughout Toronto

COST: Ranges from free shows to $60 for full-access wristbands to $399 for an interactive pass

INSIDER TIPS: Many shows go late (with some of the best acts going on after 1am), so make sure you check out the calendar before you commit to a full-access wristband. There are also one-day passes and film-festival-only passes available, so there are plenty of options. If you are making a go at it, consider taking some time off work to take full advantage of the festival, as you will be bleary eyed and quite worn out if you don't. 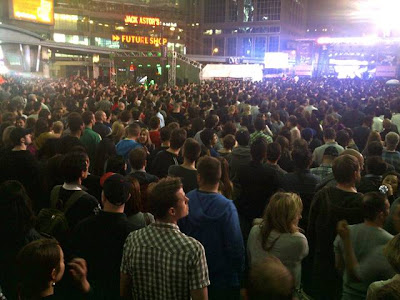