Down and Dirty with Corona - The Paint Party Edition 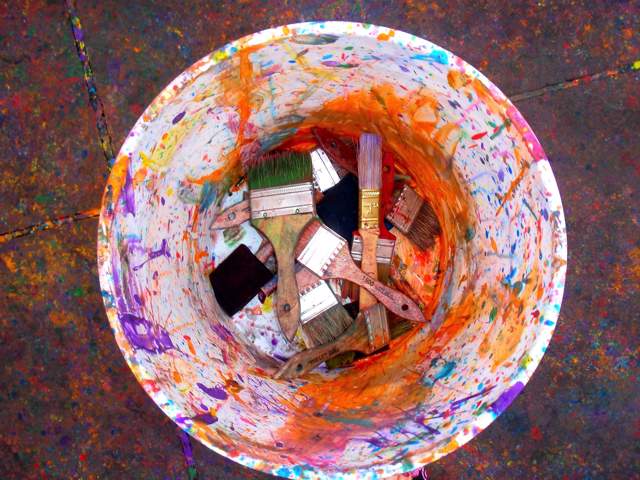 Who doesn't like getting 100% head-to-toe dirty, on purpose? There's nothing quite like walking through a crowded mall (did that) or getting on the subway (did that, too) completely covered in paint. But I'm getting ahead of myself. The Corona Paint Party was just that: an opportunity to run around in public with thousands of like-minded people, flinging paint at each other. And who am I to resist such temptation! This was a sealed deal the minute I heard about the party. Even if it did take me 20 mins of scrubbing and 2 hair shampoos to get myself back to a single skin colour and clean hair. 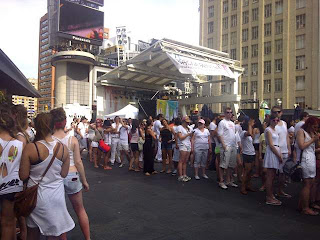 The event page invited participants to come as a blank canvass and leave as a work of art. Registration was set to start at 4pm, with the paint party starting at 5pm and the beer garden opening at 6pm. I was there at 3:30pm and the line-up already had a few hundred people in it. By 4pm, there was no sign of movement and the line grew to the point where it looped around several times. Thousands of people turned out in their best ugly white clothes (you know, the stuff you never actually wear but seem to have in your closet) to get their painting on. Finally, they started letting people in verrrrryyyyy slowly and, not too long after, we all watched as people on the inside started grabbing the full jugs of paint and flinging it at each other in giant globs, wasting it by the gallons. The organizers eventually caught on and went around the perimeter collecting these and rationing paint distribution from then on, as well as starting to water it down. Yes, they had officially started to run out of paint not 20 mins after they opened the gate. 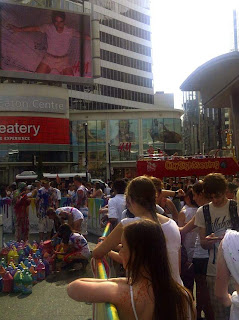 The other thing that happened was that the people on the inside started running up to the barricade and sharing some of their messiness with those still in line. While the sentiment was sweet, never discount the power of human stupidity: those in line still had their purses, phones, etc. out in the open (which quickly got hit by the splatter) and it didn't help that the spray from the bottles of paint seemed to be aimed straight at our faces. Considering the amount of time we all spent waiting around in line and how few people they were letting in (it seemed like there was hardly anyone inside the paint zone most of the time), the organizers had more than enough time to set some ground rules for those nearing the gate. Instead, all that happened was that the people who got up to the entrance signed their name on a piece of paper that didn't even have any information on what the waiver included and we had our IDs checked. That is all. And don't even get me started on the line jumpers! This was happening a lot. Oh well. 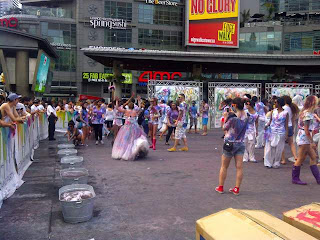 After 2.5 hours of waiting in line, I was finally able to get inside. By this point, they were pretty much out of paint and small portions of watered down concoctions caused a frenzy by the main paint stand. People were determined to have fun after spending so long in line waiting to get in. It was a sight to behold. For those not wishing to get their clothes dirty, coveralls were provided, but they did little to protect you from the mess. Because the paint was mostly water a this point, it went straight through the flimsy material, which several people discovered very quickly. And instead of being bright and colourful, it all blended in into the same dirty-pastel coloured mess. The "art" concept behind this event quickly went out the window. If you were coming to paint, you really had to be ready to get dirty. 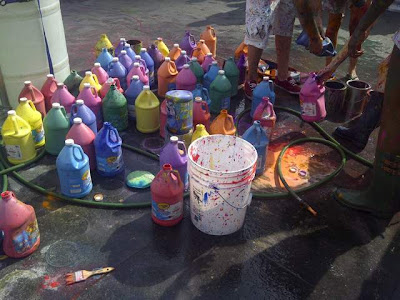 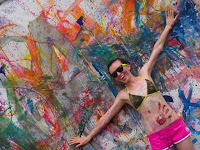 The painting itself was a lot of fun and I got good and covered in all kinds of messy goo. But with all the (dis)organizational mishaps, I doubt I would do this again. As much fun as it was, it just wasn't worth 4 hrs of my life, the bulk of which was spent waiting in line while a small handful of people took all the time int he world using up all the paint as thousands of wistful people watched on. Most people - who all spent hours in line - never got anywhere near the entrance. The paint zone was shut down shortly after it started to rain and the official story was that it was for safety reasons on account of the weather. However, as they didn't have any paint left by then, I'm not sure what the actual reason was. My friend and I were waiting in "line" (more like a giant huddle of people, with everyone doing whatever they wanted) to get into the beer garden where they had some food and Corona towels to give away (which would have been awesome), but once again, the line wasn't moving and we never got a chance to get inside (which was not so awesome). The girls from Hard Rock Cafe across the street did keep coming out with trays of free sliders but the crowd would engulf them momentarily and these were snatched up in seconds. After about half an hour in the intermittent rain, we gave up and went home (via a Burger Week stop, which was much more satisfying than this whole experience). 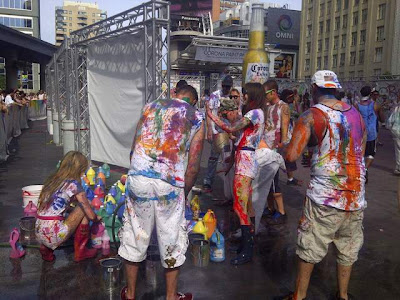 Overall, a ridiculously fun concept but very poorly organized, which I found surprising considering how many huge public events Corona is involved with. They were not prepared to handle the capacity and both the paint zone and the beer tent were tiny considering the size of the crowd. This needed to either be a ticketed event so that people didn't have to spend hours waiting in line for nothing, or the time allotted inside each zone needed to be restricted and time limits enforced. Epic fail on both counts. 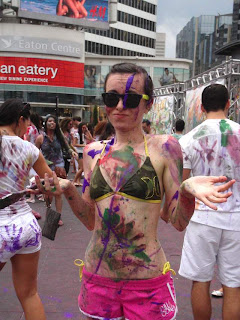 INSIDER TIPS: You either need to be there ridiculously early (try a couple of hours before the official registration start), or head straight for the beer garden before the first batch of painted people starts leaving the paint zone. Either way, be prepared to spend hours in line. Even considering the uniqueness of the event, it's not really worth it. 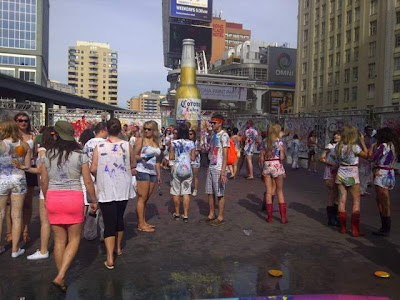 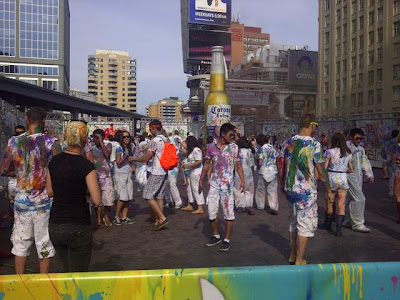 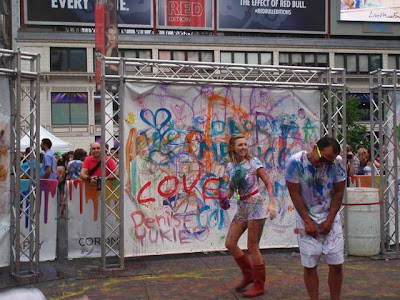 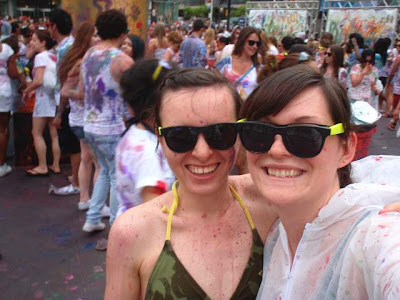 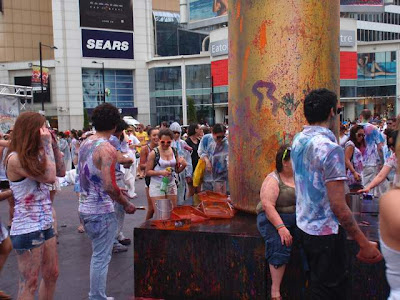 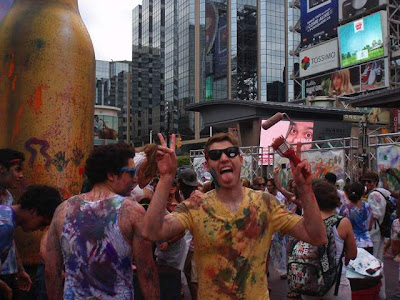 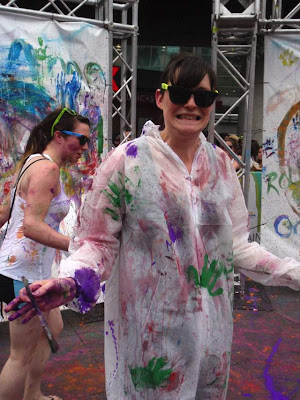