In honour of the 20th anniversary of the HotDocs film festival, the Bloor Cinema decided to screen some of the audience favourites and award winners from the past 20 years. To sweeten the deal even further, a pass was available for all 20 screenings for a very reasonable price and the first 20 people were able to snag these for a phenomenal - a mere $20. That's $1 a movie! I was one of the lucky 20 and was determined to make it to as many of the screenings as I could. I am about halfway through the program now and will do a full write-up once it's finished, but one movie deserves special attention: Chasing Ice. 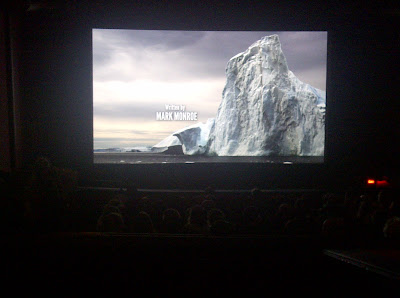 I've had my eye on this film for about a year now. I first heard about it when it screened at the HotDocs Film Festival last year and really wanted to see it but, unfortunately, my plans fell through. Disappointed, I was excited to hear that it was coming back to Toronto to screen at TIFF Bell Lightbox but I once again missed it. This time, when I heard that it was part of the HotDocs20 screening series, nothing was going to stop me. And boy was the effort worth it!

Chasing Ice is a story of a talented photographer who set out on the mission to provide irrefutable evidence of climate change to confront the climate change deniers. After partnering with National Geographic to capture the changing climate in the Arctic, James Balog teamed up with scientists, engineers, and adventurers around the world to create The Extreme Ice Survey expedition. Since 2005, they have been capturing time-lapse images from some of the most remote places on Earth, in some of the most inhospitable conditions. Chasing Ice provides a glimpse into their journey. The visually stunning film is a must-see for everybody, no matter your age, race, sex, religious beliefs, and personal interests. Aside from the stunning images (which are breathtaking) and the scientific evidence it provides on climate change in an easily accessible and convincing manner, the film is also a testament to human will and perseverance. James Balog and his family are an inspiration of what ordinary people can do  and the lengths they are willing to go to in order to preserve our only home for the next generation. It will change your view on how you will be able to face your children when they ask you what you did to help stop climate change. Truly an inspiration.

I wasn't the only one who felt this way about the film. The theatre was packed, and I've been to quite a few other screenings in this series to know that this is not a regular occurrence.  And the applause at the end was universal and deafening. If you get a chance, make every effort to see this film. Better yet, visit their website and help bring it to a theatre near you or host a screening yourself. I personally will not think twice about seeing it again.

COST: $0-$11 (there was a free members screening on another date and regular tickets were available for the March 25th screening)

INSIDER TIPS: Sometimes, when a deal sounds too good to be true, it actually isn't. If it's coming from a reputable business and you check directly with the provider, it is not a scam. After you pinch yourself and double-check your source, pull out your credit card ad snag it before it's gone. Also, check out the Extreme Ice Survey website for some of the stunning images from the expedition.
Posted by Olena at 19:04