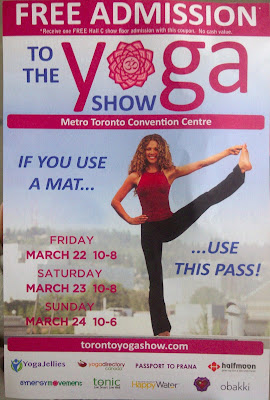 I have great respect and appreciation for yoga but I certainly won’t be traveling to India any time soon to spend a month living in a remote Ashram to learn form an obscure but legendary yogi. I dabble now and then but I would relegate myself to the ranks of occasional enthusiasts. When the yoga conference and show came up, I had some doubts about attending, but with a free admission ticket and some free time on my hands, it was hard to say no.

There are basically two main parts to the yoga conference: the trade show and classes at the main stage, and the break-out sessions covering everything from meditations to teacher training (these cost extra to attend). As I mainly go to yoga for the lovely heat I can feel right in my bones (I’m a fan of hot yoga), paying extra for the workshops didn't really appeal. I also personally like my yoga in a quiet studio, so bending over backwards in front of random strangers didn’t particularly appeal to me either. Which left shopping. Works for me!

Sadly, the shopping experience was rather lacking. While there were a couple of nifty products here and there, there were also a lot of booths offering rather hippie-looking clothes and services that definitely brought to mind late-night TV quacks. Unfortunately, a few run-ins with these right off the bat made me weary of just about everyone at the show, as I was conscious of people trying to make a buck by pushing poor-quality products on yoga-minded individuals because, apparently, we’ll believe anything as long as it’s deemed “spiritual”. I personally took an offense to some outrageous health benefit claims on the part of the few people I stopped to talk to, since as a highly educated person, I tend to question things like that and don't just take miraculous claims at face value. This is unfortunate, because there were some legitimately unique businesses there that I would normally love to explore had I come across them in a different setting, but the general atmosphere made me question them and I kept my distance. So the shopping part was a bust. 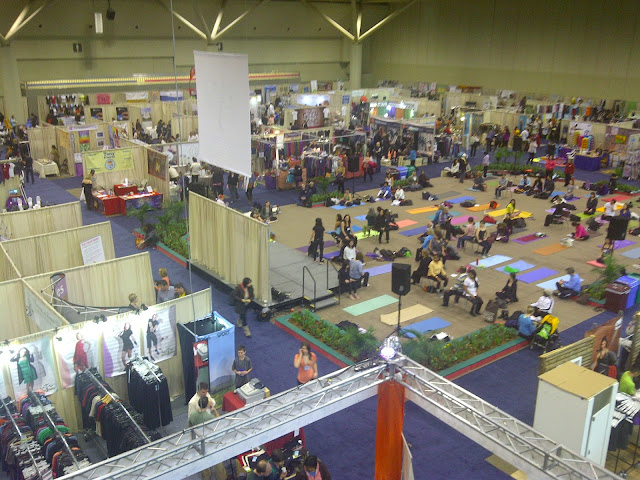 On the bright side, I picked up some free trial passes to a few studios in the city and found out about a new studio coming to Queen West that sounds rather exciting. Also, Car2Go was at the show handing out free memberships, which was a nice bonus, especially since I cancelled my Zipcar membership a couple of years ago because I wasn’t using it enough to justify the annual fee.

Overall, not a total loss but not something I will go to again. For those thinking about attending, the real value is in the workshops. It’s not my thing, but it could very well be yours.

INSIDER TIPS: Many yoga studios and yoga apparel stores offer free passes to the yoga conference (valid for general admission only, not for the workshops). Before you buy a ticket, see if a studio near you can save you the trouble. I personally came across 3 different ones that had free passes available. With so many options available, there’s really no reason for anyone to pay for their ticket.
Posted by Olena at 22:22