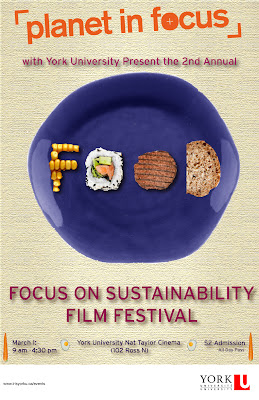 Planet in Focus partnered with York University to present the 2nd annual Focus on Sustainability Film Festival, with this year's theme being food. The event consisted of five documentary screenings, as well as a panel discussion on the subject and an interview with the director of "The Global Catch". A mere $2 got you in for the entire day, which included free popcorn and a chance to win some prizes generously donated by food-consious sponsors, such as Big Carrot, Farmhouse Tavern, Free Times Cafe, Fresh Restaurant, Front Door Organics, and Mama Earth Organics.

The event was fairly well organized, all things considered. First of all, it was a steal as far as cheap thrills go. Venue was comfortable, door prizes were fantastic, staff were friendly, and the event progressed smoothly and according to the schedule. I wish it had been in a more central location so more people could attend, as the content was quite excellent. Being at York (and not entirely easy to find once there), it did not draw a huge crowd (although it was fairly sizable considering the location and the fact that it took place during the day on a Friday). I also did not see any promotion of this event on social media sites (with the exception of a tweet by one of the door prize sponsors, who I happen to follow on Twitter). In fact, I don't even remember how I learned about the event in the first place. A social media presence would definitely have been appreciated. Finally, it was impossible to step away to get some lunch/snacks without missing part of the programming, so a refreshment break would have been appreciated; and the incessant picture-taking was distracting and rather off-putting. Nevertheless, the festival staff were very friendly and responsive to comments (e.g. request to tone down the picture taking) and both the film selection and the panel members were excellent. I also appreciated the obvious attempt to balance out the often depressing topic with messages of hope and inspiration. Thumbs up.

WHAT: Focus On Sustainability Festival: Food

INSIDER DETAILS: I love checking out relatively obscure events. Not only is the audience usually fairly engaged and committed, it's also usually small enough to give everyone a good chance of snagging one of the door prizes (which I did!!).