County In The City - PEC Comes to Toronto 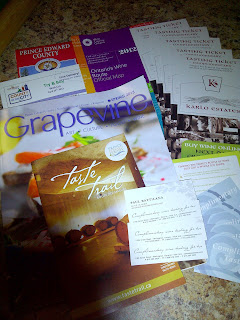 After an unbelievably fun wine tasting at Casa Loma with the Ontario Wine Society (OWS), I was really excited by the prospect of a (hopefully) repeat performance at County In The City. Same concept, different wine region (and organizer). I make it out to the Niagara wine region quite frequently but have only been out to Prince Edward County (PEC) once, so most of those wineries are new to me. Not having to organize a road trip to try and introduce myself to another handful of these and instead sample a whole bunch of them in one spot right here in Toronto was very exciting. Sign me up!

County In The City took place at the Berkeley Church and represented 14 different wineries from PEC pouring about 50 different wines. Details were a bit scarce on the website and just about the only information available was the ticket price ($39 in advance; $50 at the door, with all tastings included), date and location, and the free delivery option for purchases. I'm in between jobs at the moment, so this was a bit out of my range but luckily, I managed to score a free ticket (see Insider Tips below for details), so it was on! 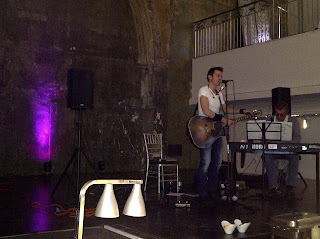 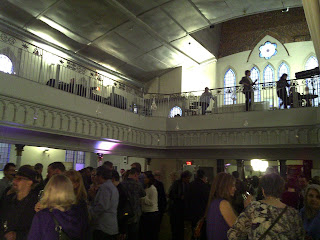 I went as somebody's plus one, so wasn't there right at the start of the event but came in halfway through around 7:30 pm. The first thing that struck me was that the crowd was incredibly different from the OWS event. While my friend and I were the youngest ones at the Casa Loma tasting, at the Berkeley Church I found myself surrounded by people in their 20s and 30s. There was a free coat check, which was great, but I had to go hunting for the wine order list so I could make notes (this wasn't handed to us with our tasting glasses). The layout was good, with tables around the perimeter and some floating tables in the middle for people to stop off at to fill out their order sheets or just finish their drinks. There didn't seem to be any order to the spots the wineries were assigned (i.e. these were not alphabetically arranged), but the event was small, so this didn't make a huge difference. I found the crowd a bit unyielding, as many people stuck around in front of the tasting tables and it was often hard to get through, but that's nothing the organizers could have done anything about. If anything, it just shows that the OWS crowd has better etiquette. There was also a live band playing, which was theoretically nice but the music was so loud that you had to shout to get your wine sampling request in, let alone talk to other people. I eventually gave up trying to have a conversation. Bit of an oversight, that. 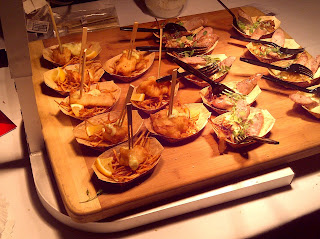 As for the wine tasting itself, there were some interesting finds (including a white port and a really interesting Pineaux from special mouldy grapes, which I had no idea were made in Ontario). I was having a bit of an intense week, so went easy on the tastings and only tried 15 different wines. Had Casa Loma tasting buddy been there with me and we had the full 3 hours to run around, we could have very comfortably gone through the entire list of offerings (though we did have some practice with this before, so perhaps not everyone could). This would have been, however, impeded by the fact that there wasn't really any food to soak up some of the alcohol. To be fair, there was food at the venue and it looked great but (a) they were already sold out of half of the items by 7:30 pm, and (b) the cost was $5 for a very small sample. That, in my view, was a bit of a rip-off, to be blunt here. Either portions needed to be bigger or the price needed to be much lower. At $40 a ticket, one should hardly be expected to shell out another $20 to get some snacks. I don't care if it's just croutons, but at an event like this, some kind of a nibble should have been provided free of charge. 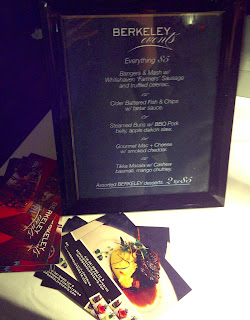 The verdict? It was OK but the event definitely has some growing up to do before it reaches the level of those put on by OWS. In fact, I was surprised the organizers had not teamed up with them. I had a nice time and was glad to discover some new wineries (and score some free tasting passes for future visits), but at the end of the way, I was glad I did not spend $40 on my ticket. Better luck next year!

WHAT: County in the City Toronto - PEC wine tasting

WHERE: Berkeley Church, Queen and Parliament

INSIDER TIPS: You don't always need to win a contest to get a free ticket to an event. Sometimes you simply need to cyber-stalk (yes, I said it) the winner and ask them to take you! True story. I happened to see the winner announcement on Twitter and threw the idea out there on a whim, not really expecting anything to come from it. Instead, what started out mostly as a joke, landed me a plus one to the event that I was rather keen on checking out. As they say, ask and you shall receive! In any case, it doesn't hurt to try.
Posted by Olena at 10:01