She Does The City Does Clothing Swap 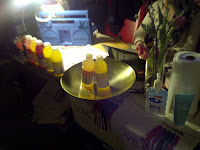 She Does The City publishes a lot of great content for women (particularly women in their 20s & 30s) and the general vibe is pretty young and hip in a modern/retro/hipster kind of way. So when they announced their first ever clothing swap, I thought chances were fairly high that the demographic at this particular event would be along the lines of something I might actually wear. Some friends of mine have hosted a couple of clothing swaps in the past but the problem with swapping clothes with your friends is that you already know everything they own and chances are, if they don't want it anymore, you probably don't either. Unless it's just a fit issue, in which case you could luck out. Point being, those can be pretty hit and miss and I don't usually go out of my way to attend.  However, when you bring a lot of strangers into the mix and target a certain demographic, the excitement factor goes way, way up. My hopes for this one were fairly high. 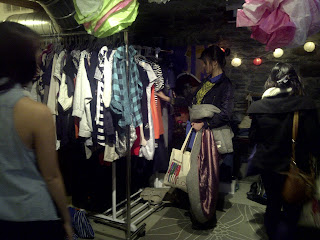 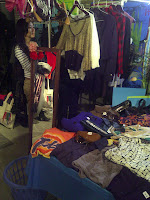 The Clothes X Swap was on my way to another event, so this was a no-brainer. I just had to carry more stuff, is all. $5 got you in if you brought at least 5 items to swap (clothes, shoes, accessories), $10 if you couldn't bear to part with anything you own and came empty-handed (which is still a great deal!). In exchange, you got a bag that you could fill with 5-10 items from the swap (the items themselves were free). In addition, there were a few tables set up for people who were selling some clothes and jewellery (all quite inexpensive), as well as a DJ playing tunes and some pop chips and vitamin water to load up on (hey, shopping is a sport and an exhausting one at that! Free shopping even more so). All unclaimed items at the end of the night were donated to charity. 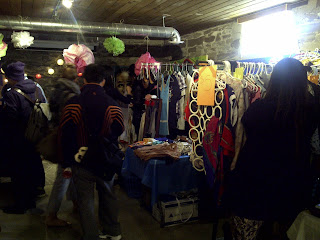 The space was down a rather uninspiring street that didn't look particularly promising, but the entrance itself was well-marked and the set-up downstairs was pretty neat. There was mood lighting, decorations, and a very organized layout with racks, tables, and baskets to make our browsing easy. A mirror was available and there was a ridiculously clean (and pretty!) washroom that could be used as a change room. Everything was organized and people browsing through were quite respectful and courteous, so things stayed organized and nobody lost buttons or got a black eye when somebody tried to elbow them out of the way. It looked liked the volunteers didn't expect the event to be quite this popular, so the space was a little tight (but not too overcrowded, so it was ok) and they seemed to be struggling a little bit with keeping up with all the new clothing contributions. But they did a good job and I hope they host something like this again. 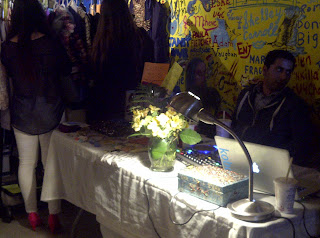 As for the clothes, my initial instinct was right on the money and the quality of the items available was quite high. Not everything was my cup of tea but many things were, and some of the things I got I'm very excited about! In all my browsing, I didn't see anything that was completely unwearable, so people weren't just dumping their unwanted crap there that nobody would want, which was really cool. Basically, it was really easy to walk away with something you liked. I was also surprised to see quite a few guys there, who were not shy about getting in there and going through everything. Definitely took me a little by surprise - I always associate these events with young women. Great event! 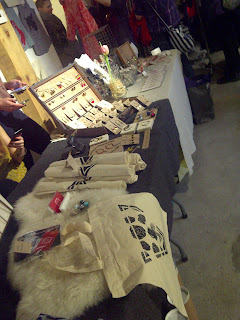 WHAT: Clothes X Swap - She Does the City Clothing Swap

WHERE: The Manifesto Space (Queen and Spadina)

INSIDER DETAILS: Keep and open mind and have fun! This is a great opportunity to try something you wouldn't normally risk trying if you have to invest money in it. And pay it forward by bringing some great items you no longer want that somebody else might enjoy. If you haven't worn it in 2 yrs (you KNOW you have that in your closet!), you're not going to wear it, so give it up and let someone else take it out for a spin. The more space you make in your closet, the more you will enjoy the clothes you have left and, ironically, the fewer "I have nothing to wear" episodes you'll go through. 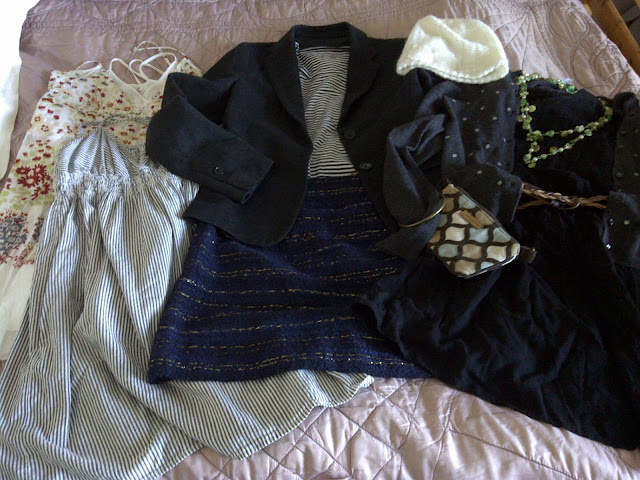