Queens of the Castle - 5 STARS Wine Tasting at Casa Loma 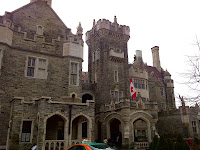 I've had quite an exciting week and one of the highlights was an evening spent living it up at Toronto's very own castle - as guests, not tourists. Five Stars at Casa Loma was billed as the wine tasting event of the year. I'm not sure I can endorse such a sweeping statement, but with 30 participating wineries pouring more than 100 wines that do well in Ontario (Chardonnay, Riesling, Cabernet Franc, Pinot Noir, and Sparklers), it was definitely one of the good apples and I was duly excited. However, at $70 a pop for non-members, the tickets were a bit out of my reach. Luckily, fate once again intervened and I managed to win yet another contest (I'm telling you, Twitter is where it's at!) for 2-for-1 tickets. The $35 admission price was much more manageable and my best friend and I put our big girl clothes on and headed over to schmooze with the local wine aficionados. 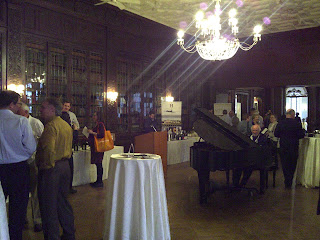 The event was a lot busier than I expected and the check-in process was a bit chaotic. The doors opened right at 6pm and there was a long line-up of people waiting to get in. But there was a self-run coat check and we got handed our tasting glasses pretty quickly, coming back to finish our registration process later when the crowds had cleared. We didn't really need to dress up - the crowd was a lot more casually dressed than I had anticipated. But hey, what girl is going to miss a chance to get dolled up and prance around a castle! Face - done, hair - done, proper shoes and real clothes :) 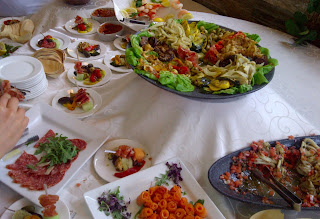 The tickets included all wine tastings and a buffet dinner. The buffet dinner was actually more of an antipasto spread than an actual dinner, but it was delicious and protein heavy, so it definitely served its purpose. On the downside, it wasn't there all night and got taken away at least an hour before the end of the event, with absolutely no warning that this was going to happen. We went light on our first approach so as not to over-stuff ourselves and were going to return for second helpings. However, when we did, the food tables were completely cleared away. That wasn't very responsible planning considering the volumes of alcohol on the premises. Made me wish I had brought a bigger purse and some tupperwear! 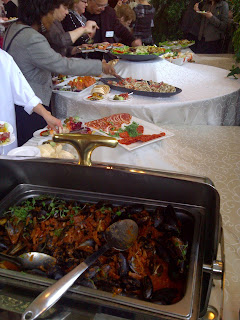 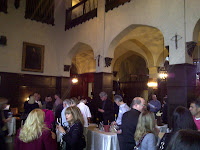 The wine itself we were much happier with. When we checked in and picked up our tasting glasses, we were given a map and a list of the wineries and the wines they were pouring. This included prices per bottle, in case we wanted to place any orders (with free delivery included). With so may options, we knew we couldn't sample them all and needed a strategy. The one we came up with was a good one (we think) and worked very well for us. We both like bubbles, so we first made the rounds to try all 11 that were available for tasting. After that, we took a food break and went back to work our way through the most expensive wines on the list that we wouldn't otherwise purchase to try. So we made our way through the $35-50 wines (vintage Pinots are not cheap!), starting with the whites and moving on to the reds. Halfway through the night, we realized that we can actually try even more varieties if we didn't both get the same samples and just took a sip of each other's. With this approach, we not only wasted less, but also made our way through a much larger portion of the list. 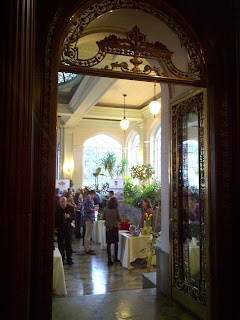 In addition to the food and drink, we also got free tickets to the Niagara Food and Wine Expo (and we managed to score 5 of these, since apparently I've been on a streak lately of running into people I kind of sort of know and they weren't going to use theirs!), as well as a whole bunch of tasting passes for a few wineries. So we definitely got our money's worth out of this event! And it was just a ridiculously fun night. We both had a blast. Sampling so many different wineries in one location without having to drive in between was super convenient and we would do it again. Sadly, we lost our tasting list at the end of the night (with all the notes on what we liked), so I don't know the exact final count, but I'm pretty sure we made our way through about 40 different wines that night. Quite a step-up from our previous record when touring the wine country. Of course, this meant that I had mad munchies when I got home since we only had a light dinner. Nothing says class like frying chicken in your underwear in the middle of the night. If there were a movie of my finest moments, this one would probably make the bloopers reel. 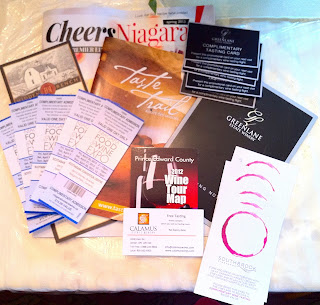 COST: $70 for non-members (we got half-price tickets)

INSIDER TIPS: If you go to an event where you get goodies (such as tickets) to an out-of-town event, talk to the other attendees. Many people don't drive, won't go out of town, or just aren't available on that date. If you're nice to them, they might be more than willing to pass on their tickets to you. It doesn't cost you a thing and you suddenly get to pack a whole car with friends for a super fun road trip. And for an event like this, make sure you have a ride home! We were VERY happy to have one.
Posted by Olena at 12:10