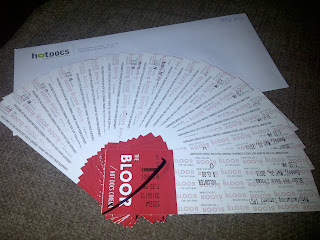 The second part of my review of the HotDocs20 series is shorter, as my schedule got in the way and I didn't manage to make it out to quite as many screenings as when I had first started out on this mission. Here are my two cents on the handful of films I did manage to see:

Waste Land - Nothing will beat Chasing Ice in my books, but this was one of my other favourites. Beautiful and innovative, Vik Muniz's project really makes you question the value we place on our own worth in both work and life in general, and how art can change that perception. The film not only proves that you can make something beautiful from what others see as trash, but also explores what it takes for someone to want to change their life. Really want it, bad enough to actually do something about it.

The Cove - This was the most heart wrenching screening for me. Very difficult to watch. I was outraged and saddened by the fact that something like this could (and does!) take place, a fact made all the worse for the lack of reason behind it. Absolutely senseless. I was also quite in awe that there are people out there who will do anything to fight for those who are helpless. The lengths the people involved in the film went to to get this story told are mind-boggling. What a project!

War/Dance - I found it difficult to wrap my head around the realities of this film. You hear the stories and you know they're true (even if unimaginable!) but it's hard to comprehend the scale and the extent of what these kids actually went through. A bit unreal.

Men of the Deeps - This one was a very Canadian story, which was nice to see, and the director was in attendance for a Q&A. A very human film. Reminded me a little of Alistair MacLeod's writing. The character of Cape Breton is captured quite beautifully and the music/singing was lovely.

Overall, I managed to see 13 of the 20 films and gave away some of the unused tickets to my friends. At $20 for the whole package, this was definitely a steal and a great experience. I enjoyed the fact that all the screenings were on evenings and weekends, so you didn't need to take time off work to attend. The 2-week break in screenings 3/4 of the way through was a bit awkward and definitely broke my stride and took some wind out of my sails by allowing the rest of my social schedule to catch up with me. Would have preferred to do this all in one go.

On the bright side, the previews eventually got a bit more variety to them as the days went on and new films got added to the regular program while some of the previous ones had finished their runs. That was a relief because I really don't think I could have sat through the exact same set of previous 13 times over the course of a few weeks.

The 2013 HotDocs Film Festival opens tomorrow with solid programming, as usual. Many screenings have already gone rush (i.e. limited tickets only available at the door and you will have to line up early to snag those), also as usual. There are a lot of great documentaries out there and HotDocs does a great job of ensuring there is something for every taste. Check out this year's program and go see at least one. You'll be glad you did.

INSIDER TIPS: Documentaries are not as boring as high school experience would lead you to believe. Many documentaries today are award-winning films that are just as enjoyable to watch as many of the feature films and infinitely better bang for your buck. The stories you see stick with you for quite some time and your horizons are broadened with each new documentary you see. Definitely make these a part of your regular entertainment routine. They can be a lot of fun (yes, even the heart wrenching ones).
Posted by Olena at 23:23

Email ThisBlogThis!Share to TwitterShare to FacebookShare to Pinterest
Labels: Entertainment