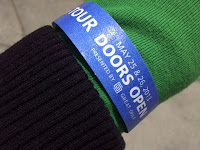 This is the final installment in my Doors Open Toronto 2013 saga. On day two of the festival, I carved out a couple of hours to take part in the Campus and Cosmos: Astronomy in Toronto walking tour presented by a UofT professor John Percy in partnership with Heritage Toronto. The tour lasted just over 90 minutes and focused on 15 stops on and around the St. George campus: 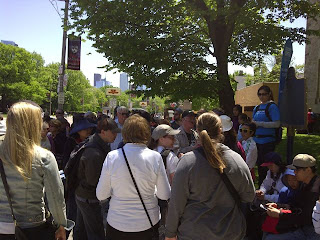 First, the housekeeping. Walking tours are both very popular and very limited in number as far as this festival goes. Check the dates and times carefully and be sure to arrive about half an hour in advance to secure a seat. I was handed a wristband and was told I could wander off until the tour start time if I wanted to, which I did because I was starving by this point. When I came back a mere 20 mins later, there was a large crowd gathered around the meeting point and an equally large crowd stretched out in a single file half a block up the street in hopes of getting on this tour. The tour was capped at 120 participants and those with wristbands as well as the first 40 people in line were able to get in. To be perfectly honest (and this won't work if everyone did it, so be courteous), any diehards could really have waited around a little and tacked themselves onto the edges of the crowd when we started moving even if they didn't get an official spot on the tour (there were a few random passerby at some of the stops who saw a crowd and stopped to listen). The tour leader - John Percy - was fantastic (and hilarious!), delivering the presentation in a charismatic, informative, and entertaining manner (including a few jokes aimed at the Engineering students we kept bumping into). He was also very accommodating, taking questions in between stops and making sure the sound system was at a perfect volume so that everyone could hear. There were also a couple of volunteers (including one with a giant marker flag that could be seen at all times) making sure we didn't lose anyone that did not wish to be lost. Finally, I should note that the tour does not go inside the buildings (there simply isn't enough time) but we were always advised when the buildings are open to the public in case we were interested in visiting later. I found the pace not too fast and not too slow, and the information easily accessible and brief enough to still be entertaining. Well done, on all counts.

Now, as to the content of the tour, it did an excellent job showcasing Toronto as an international centre for astronomical research, education, and public outreach. There were quite a few eye-opening moments (too detailed to list here) and I walked away feeling that our astronomical standing, so to speak, is quite impressive (minus the sad and unnecessary demise of the McLaughlin Planetarium). This walk has been offered several times before and will likely be offered again, so you might want to keep an eye either on John Percy (try the UofT directory for contact information; he will also be presenting this talk at Brentwood Library in the near future) or Heritage Toronto. Finally, even if you have no interest in astronomy, the walk itself if visually stunning and I would highly recommend it (either as part of a tour or on your own).

A few takeaways from the presentation in terms of future events:
WHAT: Campus and Cosmos: Astronomy in Toronto Walking Tour (part of Doors Open Toronto)

INSIDER TIPS: Dress for the weather, wear comfortable walking shoes, and don't forget to wear sunblock (as well as bring a snack/lunch and some water). A notepad and a pen can also come in handy, as you might want to look up a number of things touched upon during the talk (including future events). 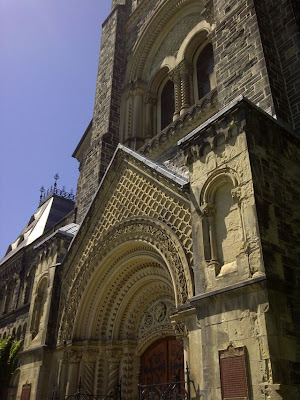 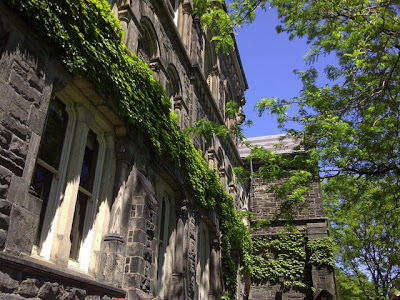