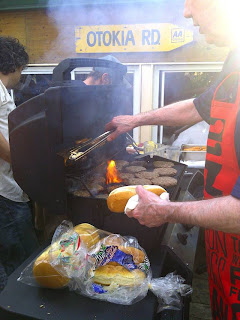 In my experience, when bars host an anniversary party, it's generally a really good time and comes with lots of freebies, so even if the details are really scarce, I usually carve out some time to check it out. This was the case with the 33rd anniversary celebration at Hemingway's in Yorkville. All I knew was that there was a patio party in the works starting at 6pm and the word "BBQ" made an appearance. My friend and I stopped by on our way to another party and we were not disappointed. 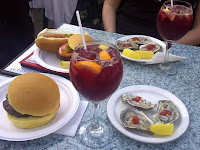 The start was a little shaky, as the staff on the patio seemed a little confused. We got there right at 6pm and it was packed with the after-work crowd (many of whom didn't seem to know anything about the party). There were balloons everywhere but the staff didn't seem to be advertising it. When we said we were there for the celebration, the hostess asked us if we had a reservation and it was our turn to be confused. After some milling around, they gave us a table and when a server came over, we asked her what the deal was with the anniversary party. It was all uphill from there. 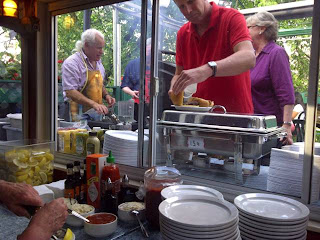 There was a bbq set up and grilling was in full swing. After we ordered some sangria (which isn't on the menu but is delicious) and loaded up on free oysters, we moseyed on over for some free burgers and sausages. They also had rice and curry and there were free Molson Wheat beer samples.  Other than our sangria, we didn't pay for a thing and ended up with free dinner. The only thing missing was some music (the band was downstairs) but we didn't even notice this until the very end. The patio itself is pretty awesome and definitely worth checking out even outside of special celebrations.

Happy Birthday, Hemmingway's! We'll definitely be back next year. 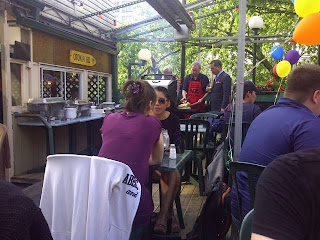 INSIDER TIPS: Things were already hopping when we got there at 6pm, so it doesn't look like we needed to wait to come over. Next year, we're going right after work and getting started earlier.
Posted by Olena at 15:39