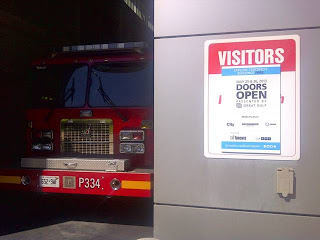 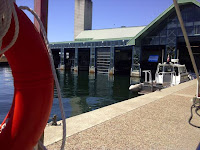 Sunday morning, everyone had their doors open except the TTC, it seems. With so many venues to check out (and construction and traffic to contend with), driving isn't really a viable option. But good luck getting into a subway station (including their bus platforms) before 9 am: doors were firmly locked as if they were trying to fend off a zombie attack. Very disappointing that our public transit system would not do its part to help people explore Toronto's architectural and cultural heritage once a year. And this isn't even counting the fact that the first train was late and there was a major service disruption a mere 15 mins later, with all the accompanying confusion and lack of information and coordination on their part. But that's a different story (don't get me started on it!). In the end, after spending 2 hours (!!) getting downtown (a drive I can normally make in 20 mins at this time of day), I had to reshuffle my itinerary (missing out on a couple of planned stops) and finally got started. In addition to a walking tour (to be covered in a separate post), my stops for the day were largely concentrated along the waterfront and included: Toronto Marine Fire Station 334, Toronto Police Marine Unit, three ships (Pathfinder, Mariposa, and the Trillium steamer), and the Native Child and Family Services building. There were, of course, many more venues that I would have loved to see but between the commuting frustrations and the time required to actually partake in Doors Open, there simply weren't enough hours in the day (and it was a 17.5 hour day for me by the time I was finished). 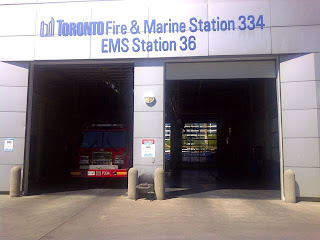 The Fire Hall was one of my favourite stops and I dawdled around for close to an hour but then I have a particular weakness for Toronto's finest and it was hard to walk away. The bay doors were wide open and visitors could wander around the first floor of the hall (their kitchen smelled like bacon and the memorabilia was pretty interesting), explore the trucks and the fire boat (those things are insane when you're done opening all the compartments and gawking at all the gauges, levers, and nozzles), help them hose down their cars (should've packed a bikini!), learn about the building (it was built to look like a boat), and ask the friendly fire-fighting faces at the hall a million and one questions about their work (try breaking ice every morning at 5:30 am in the winter, for example, so the island residents can get to the mainland). Forget the kids - the moms were having just as much fun! This stop was new for this year and definitely a lot of fun to explore. Double thumbs up.

The Toronto Police Marine unit was nearby and I moseyed on over for a tour, which they were running every 20 mins or so. I got the longest-service officer in that station (with 35 yrs on the force!) and he had all kinds of stories and could ramble off all kinds of specifications about their boat fleet. Not exactly the most exciting speaker for the kids, but many of the details about the equipment are kind of mindblowing and I found the whole thing quite interesting. The only part of the station we toured was the boat dock, so if you've got young kids who are dreaming about guns and jail cells, I would recommend a different location for a visit (I believe the 11 Division was open to the public as well). 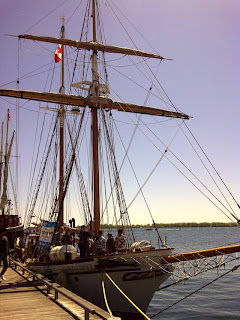 Being on the waterfront (and it being such a nice day), I ambled along the docks toward the Trillium steamer and stumbled upon a few ships you could clamber aboard on the way (these weren't on the Toronto Star list and I haven't cross referenced the website again to see if they were there). Pathfinder was a tall ship, so if you've ever dreamed of being a pirate, this one's for you. It's part of the Toronto Brigantine Inc., which does tall ship sailing adventures for youth in Ontario. It doesn't look that big on the surface but I was rather shocked by how deep the hull is, so that more than explain the whole living arrangements aspect. Mariposa also had several of their ships open to the public. I climbed aboard the largest one for a tour and a chat with the captain (apparently men in uniform was the theme of the day, not that I'm complaining). Nothing quite like hearing someone compare docking a ship the size of some condo buildings to parallel parking. But my favourite ship was the Trillium steamer. Loved it, from top to bottom. And I'm very excited to report that it will be sailing from the ferry docks to the island on weekends this summer. Definitely can't wait to go for a ride (and that captain is a funny one!). 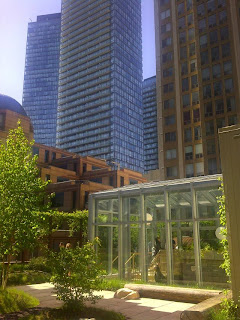 After spending the morning at the waterfront, I didn't have much time before the walking tour I wanted to catch (plus I was starving), so I headed over to the meeting location and got my wristband before picking up some takeout and spending the next couple of hours walking around the UofT campus and hearing all about our history with astronomy (more on this in a separate post). It was after 3 pm when we finished and I didn't have much time left. In the end, I only had time for one more stop because I needed to wait for a guided tour and didn't have enough time to leave and come back. However, the Native Child and Family Services tour was worth it. The staff were wonderful and the building is simply gorgeous (if you go for open spaces, natural elements, and meaningful artwork - which I totally do!). The space reflects exactly what the organization stands for and I can't wait to explore that culture further during one of their community nights (every Monday at 6 pm and everyone is welcome).

Overall, Doors Open Toronto is one of my favourite festivals and I would suggest blocking off the whole weekend to take advantage of it (and to go every year since there is so much to explore). Personally, I like self-guided tours best because it allows me to get in and out faster, which means I can explore more venues. On the other hand, the guided tours are very informative, so they definitely have added value. My only beef is that most tours are quite long and run only once an hour (if that), so that seriously cuts into the already short time you have to get into those open doors. Patience may well be a virtue but it's usually not one of mine and I like to pack my sightseeing pretty tightly (ask my mom who talked me into taking her backpacking with me in Spain one summer!). But either way you do it, I highly recommend some quality exploration time.

WHERE: 150+ locations across the city

COST: Free (with very few exceptions when TTC or ferry access is required)

INSIDER TIPS: Normally, I would say take public transit since parking in several different spots downtown gets costly (and driving, parking, and backtracking to the car can get frustrating and time consuming) but considering my TTC misadventures, that's something I'm now on the fence about. Sunday in particular, I would perhaps consider driving to the starting point and taking transit from there, only returning to the car at the end of the day. Also, while you don't need to do any serious planning to enjoy the event, things will move faster and smoother if you have a vague idea of what you want to see, which days/times those venues are open, and whether you need to be part of a tour to gain admission (and how often these run). Make a rough plan but be prepared to change it as the day progresses.