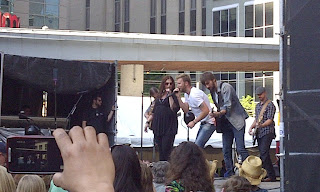 My concert-going budget these days isn't what it used to be and my indie music days are largely behind me as well (along with the accompanying dive bars, lost hearing, drunk misfits trying to take me home, and random road trips to see bands I like). Which is why I was really excited to hear that Lady Antebellum were in town playing a free show in the Yonge-Dundas Square courtesy of 98.1 CHFI. I had a ton of work to do at home before heading out to a movie screening later in the evening, so I wasn't sure I would be able to make it but, in the end, I couldn't resist and found a way to squeeze it in. 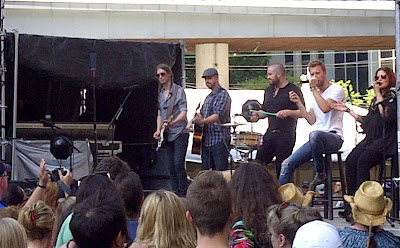 I'm definitely glad I did! Lady A were fantastic live, despite the fact that the show was outdoors and in the middle of traffic. They played an hour-long set and the crowd had great energy, with everyone singing along a few times throughout the show. Hillary's baby is due pretty soon, so they won't be touring much for a while, which made this an extra special treat. Almost as good as witnessing with my own eyes that pictures and videos of Charles do not do him justice. Definitely some good genes in that band! But back to the music. It's easy to see why country music is gaining popularity with bands like this around. Easy listening, catchy (I've had one particular song stuck in my head for two days now), and soulful. A winning combination and testament to why they have such a loyal fan base (and awards to boot!). 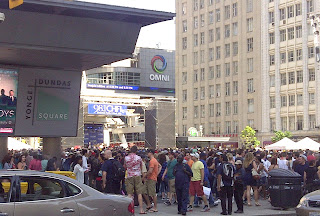 INSIDER TIPS: Concerts at Yonge-Dundas Square are not for the faint of heart but the couple that I have been to have been fantastic, so it's definitely worth the effort as long as you know what you're getting into. First of all, be ready for the crowd, which will be massive. Getting annoyed and frustrated will not do you any good, plus you don't have any more of a right to be there than anyone else. So go with the flow and you'll have a much better time at the show. If you want a good spot, you'll need to be there waaaaay early and make sure you meet up with all your friends before trying to infiltrate the mob of people because finding each other after the fact will be impossible. Keep in mind that the stage is recessed a little in between the giant speakers, so your view will be blocked from the sidelines. I find that the southeast corner is the easiest to navigate and gets you closer to the stage faster. If you don't much care about being able to see, there are a few patios in the area that will save you from the crush of the crowd and allow you to hear everything while enjoying a cold one. Or you can mosh it with everyone else as long as you wear sunscreen and comfortable (and for your own safety, closed toed) footwear. Think of the crush of people as part of the experience and enjoy the show!