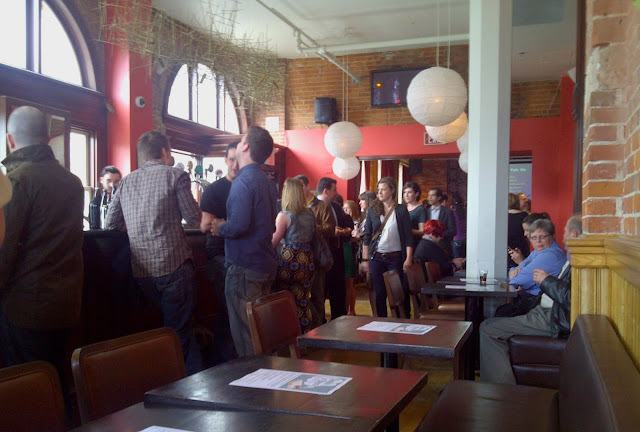 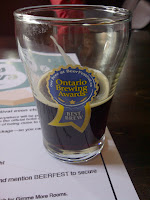 For the past three years, I have associated the initials OBA with the Ontario Bar Association. Now I have a much more exciting replacement: Ontario Brewing Awards. The 2013 ceremony took place at the Gladstone Hotel this past Tuesday and this is definitely an event that's going straight to my Annual Favourites list. 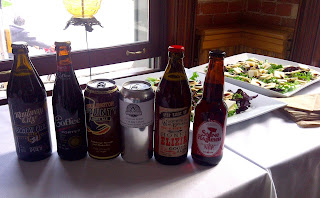 OBA13 featured an award ceremony and a beer sampling portion of some of the local craft breweries. Tickets were a mere $10 online (not sure if there were any left for door sales, as I got mine months in advance and didn't keep track of whether these were selling out, though I would imagine that to be the case). The cafe and the main presentation space were closed off for the reception, with a live band providing entertainment. With windows open to allow fresh air into the room, it was a perfect spring evening and a beautiful set-up. I was there early (and there was already a line of eager beer affectionados to get in), and managed to snag one of the few tables in the cafe portion (I figured a long night of tasting might leave us wishing we could do it in comfort). 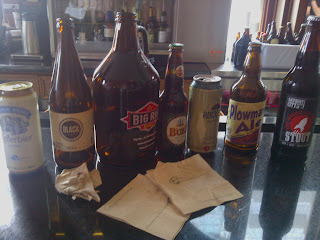 There were four bar stations throughout the space, each sampling about six local brews as well as hosting trays of tasty nibbles. The bar stations seemed to be themed. One had dark porters, one was quite hoppy, one had lighter fruitier brews, and I didn't quite make it through all the brews at the fourth bar but it seemed to be a bit of a mix. One thing is certain though: all of these were fun! How often do you get to sample more than two dozen delicious local craft beers in one place and still be able to walk in a (semi-) straight line when all is said and done? I was definitely a big fan. And this even would be perfect for someone who doesn't think they like beer. Most of the flavours were much more creative than the standard 2-4 finds at your local beer store that seem to show up at backyard parties. Give some local breweries a shot and you just might discover your inner beer fan. 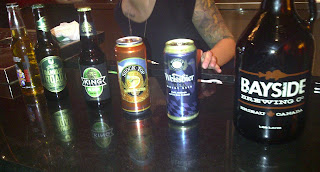 If you already like beer, definitely add this event to your radar. Many of the brewery representatives were actually on site to accept their awards, so you could easily chat them up if you could tear yourself away from making your way through the sampling list. If you are coming straight from work (which most people were, as the event started at 5pm), I would suggest eating something before you head out. While appetizers were delicious and frequently refilled, if you are serious about your beer tasting, you might want a bit more substance in your belly. Otherwise, you'll be making frequent trips to the various bar stations to load up on snacks (which we certainly did!).

INSIDER DETAILS: Get there early if you want to snag a seat! Otherwise, just show up, enjoy, and give something new a try. 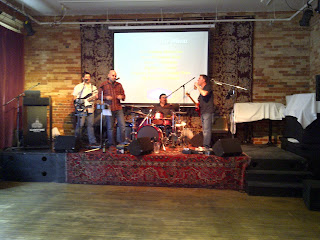 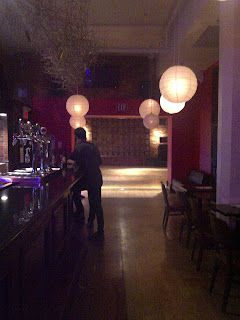