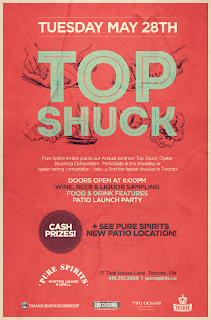 Of all the things I like, oysters, patio parties, and sampling food and drinks are pretty high up there. When I came across the poster for Top Shuck at Pure Spirits Oyster House & Grill, I was duly excited. Unfortunately, the event itself didn't quite live up to my expectations. Granted, the weather did not cooperate in the least and the whole patio thing went straight out the window, but even with the location changes (it was moved across the lane to the second floor of Boiler House on account of heavy rain), there were a lot of things that could have benefited from better coordination. 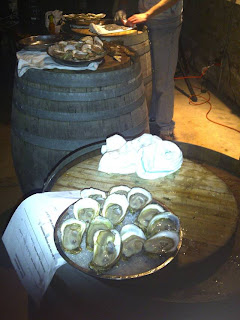 My friend and I got there a little after six and there wasn't really anyone up there yet. The servers  nodded a hello at us but didn't say anything beyond that. Slightly confused as to what the arrangements were for the night, we walked over to the back of the room where a couple of girls were manning the promised "wine, beer + liquor sampling" bar. They filled us in on the broad details for the night. The sampling itself consisted of one Polish beer (which I liked), one white wine, and one vodka brand. Other than that, it was a regular drink menu at the bar (not sample sized, so you really had to commit and have your wallet handy) and two menu items (kabobs for $8 and a burger for $12). When we asked about the oysters, the server had to get back to us on that and finally came back with the news that yes, we could order oysters (which were good but didn't come with any condiments). We had our oysters and a couple of drinks and were thinking of heading out to get some wings at Mill Street Brewery down the street when they finally made an announcement that the shucking competition will be starting in 20 mins (which was more like an hour). Tired of waiting, we decided to leave but it took us a long time to actually flag down our server so we could get the bill. Just as we were paying up, I happened to run into a guy I see at a tea shop I frequent and we got chatting, which resulted in us staying a lot longer than we planned to at that point (and also made the night a lot more enjoyable). 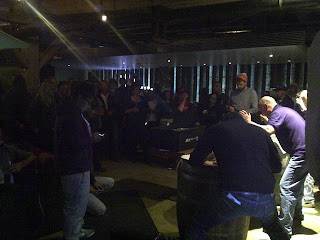 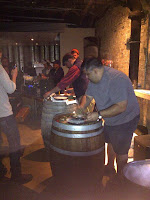 When the competition finally got underway, it was pretty neat. This was definitely more of an industry event and there were a lot of people who knew each other and came to cheer on their favourite shucker. People kind of congregated in the front and it was a pretty communal atmosphere. There was a judging table set up in the back of the bar and a couple of guys were hard at work there going through the finished plates to see if any points needed to be taken off for transgressions like damaged oyster meat, etc. (yes, there was a whole set of rules that came with this!). And the music was pretty solid, so that part was fun. We left after a couple of rounds of the competition and finally got our wings, which was a good time and much more satisfying than our Top Shuck experience. 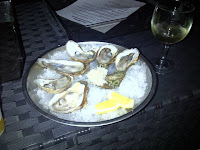 Overall, I found the idea interesting but was rather underwhelmed by the execution. It's hard for me to judge how much of an effect the weather and venue change had on the event. I am willing to make some concessions but there were still a lot of things that should have been done better, especially when I compare it to many of the other events I have gone to recently at bars and restaurants. 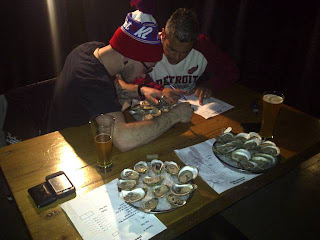 COST: Free (plus the cost of food and drink)

INSIDER TIPS: If you are seafood restaurant business, you're likely to have a good time and network with your peers. However, for a regular curious bystander, there are better events to attend.